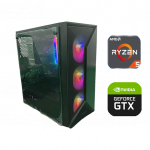 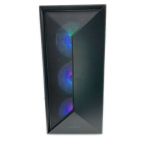 This Exlen Lightspeed gaming PC features a powerful 6-Core 12-Thread AMD processor paired with a powerful RTX 3060 TI. This combination results in a fantastic 1440p gaming experience easily able to run all your favourite games including but not limited to; Fortnite, Rocket League, Apex Legends, WoW, Counter-Strike, Minecraft, Roblox. The PC features a lightning-fast 512GB NVMe Solid State Drive meaning it boots in less than 15 seconds from cold, you’re guaranteed to be the first in the lobby and it has room to fit all your games, applications and data.

The Ryzen 5 5500 can provide you faster and smoother computing experiences. Allow Ryzen to power your experience and be prepared to dominate tasks both in-game and out. Driven into existence by the user’s passion AMD have forged a processor with the performance power to dominate your favourite applications, games and more.